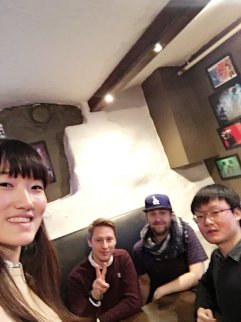 The games yesterday were quite hard but we managed to win 2-1! We were scared that they would go for a heavy push lineup in the second game so we stole Pugna from them (which I also ended up playing) but with no real plan how to use it ourselves :D. I can admit it’s not really my type of a hero, I’m even 1-6 with him in pubs but I tanked it and tried to make the best out of it ^^.

After the games, me and Loda met up with two Chinese fans who currently are studying in England. They were here in Gothenburg on vacation (I think) and they had a gift for us with them that they wanted to hand over. We met them in the gaming bar (where they had been watching our games) over some nice food and drinks. We were there for an hour before we had to head home again, was really nice to see them! They gave me some tea from England that the Queen apparently likes so I’m sure I will like it as well :). Thanks again!

As you can see in the picture below Shiva goes crazy when he gets to play with his new toy. He keeps on chasing it until he catches it or are too tired to run.. 😀

View all posts by Akke

3 thoughts on “Tough games against MB”